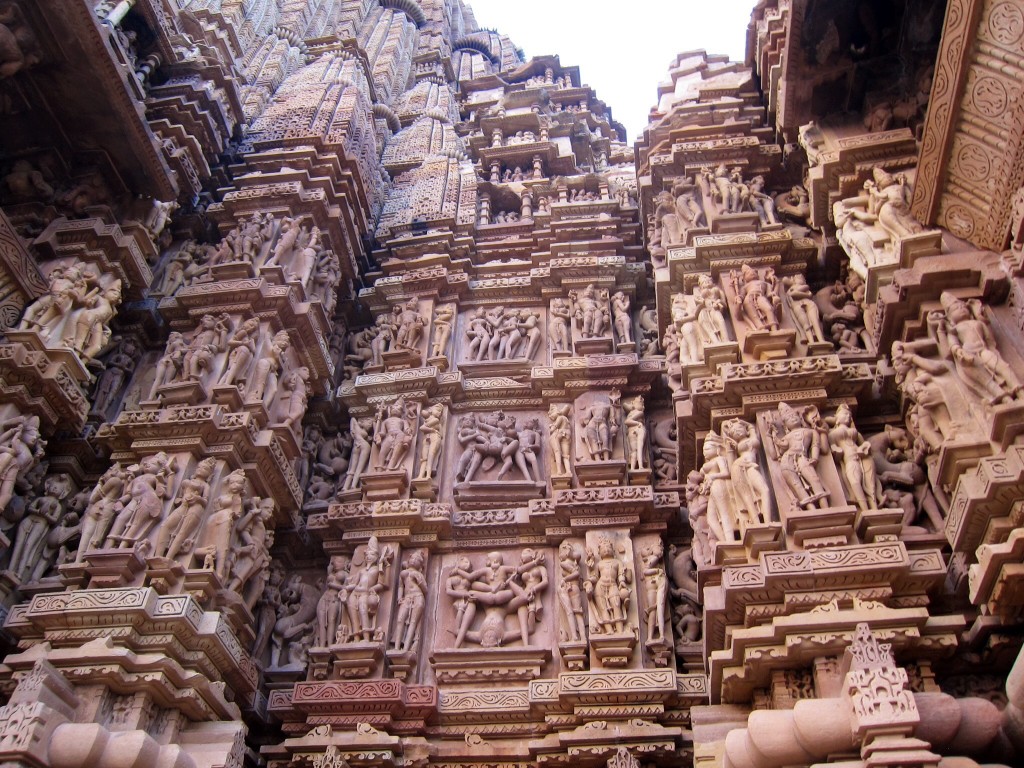 The best way to get to the sexy temples of Khajuraho is to take a 45 minutes flight from a military airport in Agra. After a morning visit to the Tomb of Akbar the Great in Sikandra, we drove to the airport, where I, simply by chance, went through my belongings and found out that a significant amount of money was missing from my travel emergency cash.
I have a long list of countries I have been to, and depending on the information I gather about my next destination, I usually decide the possible ways of payment while traveling. Obviously, Amex and credit cards with no foreign exchange fees (Capital One, for example) are the best, and ATM withdrawals, despite all, still give you the best possible rate, however, I decided to bring some amount with me in cash. Apparently, somebody wished to give himself a Christmas present by stealing my money. If before, I closed my eyes on beggars, poverty, filth, rudeness and lack of basic manners, the theft made me realize that everything around me was not romantic, poor but kind in heart, it was ugly, permanent and opportunistic.

My Christmas Day started badly, but I didn’t want this incident ruin the rest of our trip. In the end, Dimi and I were going to Khajuraho – the World Heritage-listed group of temples, exhibiting the most exquisite temple art in the world.
The Temples of Khajuraho are unique, because they represent life, love, joy and more importantly, insatiable sexual appetite, uncountable love-making lessons and simply eroticism. It is a stone-carved version of Kamasutra.
All the temples (Western, Eastern and Southern groups) were built in the short span of a hundred years, from 950-1050 A.D. Of the original 85 temples only 22 have survived till today to constitute one of the world’s great artistic wonders. The creators of Khajuraho claimed descent from the moon and the legend behind the founding of this great dynasty and the temples is a fascinating one. Hemwati, the lovely young daughter of a Brahmin priest, was seduced by the moon god while bathing in a forest pool. The child born out of this union was Chandravarman, founder of Chandela dynasty. Brought up in the forests by his mother who sought refuge from a censorious society, Chandravraman, when established as a ruler, had a dream visitation from his mother. It is said, that she implored him to build temples that would reveal human passions, and in doing so, bring about a realization of the emptiness of human desire. It is also possible that the Chandelas were followers of the Tantric cult, which believed that gratification of earthy desires was a step towards attaining the infinite liberation or nirvana.
Another version of the origin and sexual explicitly of the temples, according to our guide Krishna, was a fact that people at that time became very religious and preferred thier gods to earthy pleasures. Eventually, it led to a significant drop in population and in order to stimulate sexual libido of his people, King of Chandela ordered the Temples to be built.

With the decline of the dynasty, the Khajuraho temples lay forgotten for almost 8 centuries, covered by the encroaching forests, victim to the ravages of the natural elements but saved from the desecration of Muslim invaders. The temples remained largely unknown until British officer TS Burt was apparently guided to the ruins by his palanquin bearers in 1838. Rediscovered, restored and cleaned, Khajuraho temples yet again came to claim their glory.

Our flight from Agra was delayed by 90 minutes, so we arrived to Khajuraho around 3.30 pm. A ten minute taxi ride (Rs 200) later, we checked into our hotel (Harmony Hotel – $25 per night) and headed out to the Western group of Temples, which was 5-7 minutes walk from the hotel.
The Temples close at 5.15 pm, so we had about an hour to run through them. At the entrance gate (Rs. 250 per ticket), we hired a guide (Rs.500 evening rate) – Krishna, who turned out to be very efficient and knowledgeable.
The temples are examples of Indo-Aryan architecture, but it’s their sexually explicit themes that have made Khajuraho famous throughout India and the world. Around the outsides of the temples are bands of artistic stonework depicting the life circa 1050 – gods and goddesses, solders, animals, but most commonly – women and sex. We started at the Varaha Temple – dedicated to Vishnu‘s boar re-incarnation. Opposite to it, is the large Lakshmana Temple which took 20 years to build. It was completed in 954 A.D. during the rein of Dhanga and arguably is the best preserved temple in Khajuraho. Carvings of seduction, intercourse, ultimate sexual nirvana, naked women, dressed women, three women and one man and the other way around, as well as two men and a horse – you will find anything to please your taste. Everything is done in an exquisite, sensual but unrealistic to India ways, which I brought up before Krishna. Women, depicted on the walls of temples – full chested with tiny waists and luxurious hips – are more suitable to portrait Colombian women than Indian. We moved on to the 30.5 meters long Kandariya-Mahadeva temple, which was built between 1025 and 1050 A.D. It is the largest temple representing the highpoint of Chandelan architecture. It is also the best temple to study sexual acrobatics by following 872 statues, each is of 1 meter high, performing every imaginable position. The 31 m-high sikhara, aka linga, a phallic Shiva symbol, is worshipped by Hindus hoping to seek deliverance from the cycle of re-incarnation. We didn’t have time to see everything, but with Krishna’s help, we got a taste and some knowledge of the place and its historic value. We scheduled the next-day 7 am visit to Eastern Group of Temples with Krishna and went to check out Kandariya Dance Show (Rs.500) recommended by our hotel. Frankly, it was a waste of time, as it looked and felt like a high school performance by the students during their reading week. December 26.
Krishna picked us up shortly after 7 am and drove us to the Eastern Group of Temples – Jain Enclosure (free entry, Rs.900 for a guide). There are several temples there built for three disciples of Jainism.
While not competing in size and erotica with the Western Temples, Parsvanath Temple, the largest of the Jain Temples, is beautiful in its construction and precision. Some of the best preserved Khajuraho images came from there – a woman removing a thorn from her foot, another – applying makeup. Within, a throne faces the bull emblem of the first tirthankara, Adinath. The adjacent, smaller Adinath temple has been partially restored over the centuries. It is similar to the Vamana temple in the Western Group, with only striking black image in the inner sanctum reminding us of a Jain origin. There are a few more small temples which we didn’t have time to see because our guide had a prior arrangement and had to leave by 8.15 am. However, we had time to check out a functioning Jain temple located in the Eastern Group, and witnessed a ceremony of the Saint shower, when women followers weren’t allowed to enter the main room, but sat outside on the rugs, while male worshipers were climbing the stairs and pouring water (perhaps, some other liquid) on the head and shoulders of the idol. Upon return to the hotel, we had a brief breakfast at Zobra, the hotel’s restaurant, and departed to Aurangabad. I have to admit that 18 hours in Khajuraho weren’t enough to get a spirit of this 17,000 residents village, but were sufficient to get a small glimpse of sexual carvings of its Temples.